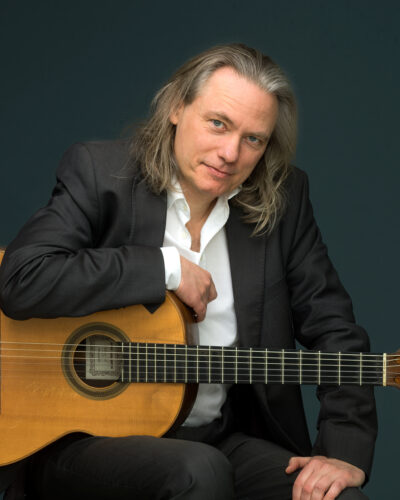 Mikkel Andersen is a Danish guitarist based in Copenhagen and he began playing the guitar at 9 years old in his hometown near Roskilde, Denmark. He continued this passion throughout his young adulthood and went on to study classical guitar with Erling Møldrup at the North Jutland Academy of music in Aalborg, Jutland’s Academy of music in Aarhus, as well as with Carlos Bonell at the Royal College of Music in London.

Mikkel has since traveled the world as a chamber musician and classical soloist. Beyond his role as a soloist, Mikkel Andersen also plays in various ensembles and has contributed to a series of recordings in Denmark and abroad. Further development of his musicianship has benefitted from association with other musicians and composers he’s met, played together with, or whos work he has performed.

Mikkel’s urge to connect and communicate with others shines through his private guitar teaching and elementary teaching of his pupils. He directs the guitar school Casa de la Guitarra, Københavns guitarskole where he devotes his talents to enabling children and adults to connect and express through music.

He has released 3 Solo CD’s with music from the core repertoire of the classical guitar. All on airplay on Danish radio. Also has he encouraged a number of composers to write for the instrument. The outcome has been a large number of traditional compositions to the more experimental works. He has been touring intensively in Southamerica, USA, Cuba, the Baltics and Greenland a.o.

“His concert was a meeting with beauty, opening the door into new worlds and leaving a lasting imprint on the soul.”